Calgary, Alberta – Alberta University of the Arts (AUArts), the province’s newest university and the only one dedicated to art, craft and design education, will launch its Premier Visiting Speaker Series with a presentation by two groundbreaking artists and researchers.

Skawennati and Jason Edward Lewis are pioneers in Canada’s vibrant digital art scene. They are especially significant for their use of creative and emerging technologies in exploring issues of identity, indigeneity and the power of the digital imaginary.

They co-direct Aboriginal Territories in Cyberspace, Skins Workshops on Aboriginal Storytelling and Video Game Design, and the Initiative for Indigenous Futures while both maintaining active personal practices.

“In the light of Canada’s efforts for truth and reconciliation, it is significant that AUArts is leading off with a discussion how art and technology can create possible spaces for future indigeneity that has been nearly eradicated during a very complicated past,” says AUArts Media Arts Professor, Kurtis Lesick. “The power of Skawennati and Lewis’ work is that it questions how the past can be resolved when we are unable or unwilling to imagine certain communities in the future.”

AUArts President and CEO, Dr. Daniel Doz adds “it is the social responsibility of art, craft and design educators to ask and explore hard questions and lead essential dialogues about our future. Alberta University of the Arts is proud to take on its leadership role in brokering these conversations. I cannot imagine two better artists to help us launch this endeavor.”

>>> Register for the event via Eventbrite

>>> Learn more about the event 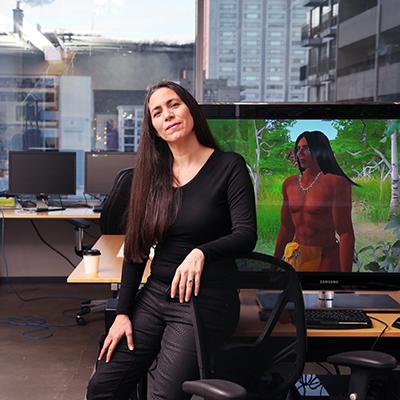 Skawennati makes art that addresses history, the future, and change from an Indigenous perspective. She is best known for her machinimas—movies made in virtual environments—but also produces still images and sculpture.

Her pioneering new media projects include the online gallery/chat-space and mixed-reality event, CyberPowWow (1997-2004); a paper doll/time-travel journal, Imagining Indians in the 25th Century (2001); and the machinimas TimeTraveller™ (2007-2013), She Falls For Ages (2017) and The Peacemaker Returns (2017). These have been presented in Venice, Germany, New Zealand, Hawaii, Ireland, China, and across North America in major exhibitions such as “Now? Now!” at the Biennale of the Americas; and “Looking Forward (L’Avenir)” at the Montreal Biennale. Her award-winning work is included in both public and private collections including the National Bank of Canada, Eiteljorg Museum of American Indians & Western Art, Global Affairs Canada and the Montreal Museum of Contemporary Art.

Born in Kahnawá:ke Mohawk Territory, Skawennati is Kanien'kehá:ka of the turtle clan. She holds a BFA from Concordia University in Montreal, where she resides. She is Co-Director, with Jason E. Lewis, of Aboriginal Territories in Cyberspace (AbTeC), a research network of artists, academics and technologists investigating, creating and critiquing Indigenous virtual environments. She also co-directs their Skins workshops in Aboriginal Storytelling and Digital Media. This year AbTeC launched IIF, the Initiative for Indigenous Futures; Skawennati is its Partnership Coordinator. 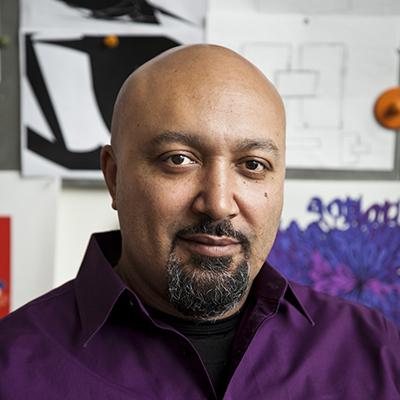 Jason Edward Lewis is a digital media poet, artist, and software designer. He founded Obx Laboratory for Experimental Media, where he directs research/creation projects exploring computation as a creative and cultural material. Along with the artist Skawennati, he co-directs Aboriginal Territories in Cyberspace, Skins Workshops on Aboriginal Stortyelling and Video Game Design and the Initiative for Indigenous Futures.

He has worked in a range of industrial research settings, including Interval Research, US West's Advanced Technology Group, and the Institute for Research on Learning, and, at the turn of the century, he founded and ran a research studio for the venture capital firm Arts Alliance.

Lewis is a former Trudeau Fellow and a former Carnegie Fellow. He received a B.S. in Symbolic Systems (Cognitive Science) and B.A. in German Studies (Philosophy) from Stanford University, and an M.Phil. in Design from the Royal College of Art.

Formerly Alberta College of Art and Design, we are dedicated to innovative and emerging art, craft and design programs. For nearly 100 years, AUArts has educated in ways that test the boundaries of common thought and we celebrate eleven Governor General’s Award winners amongst our faculty and alumni. Alberta University of the Arts has five Schools of learning: Visual Art, Craft and Emerging Media, Communication Design, and Critical and Creative Studies offering undergraduate BFA and BDes degrees, and a graduate MFA, plus the School of Continuing Education and Professional Development.